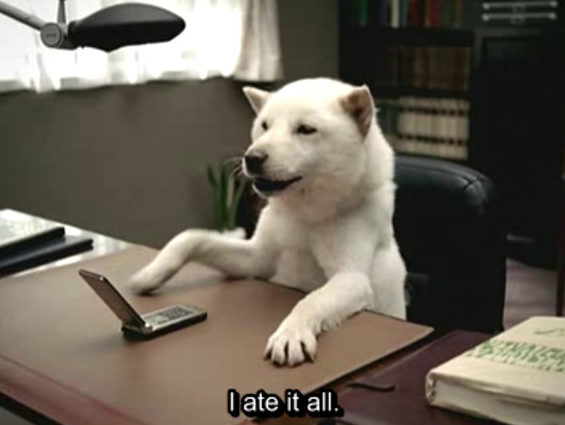 The Dog that Ate Japan

The Dog that Ate Japan

I have a confession to make. After over a year living in Japan, I left the country still almost totally baffled by their TV advertising. To my big dumb foreign-person eyes it looked like a random Technicolor cacophony of such unparalleled mania I rarely knew what was being advertised, let alone what was going on.

Often I was left in a state of near-trauma after the 30-second onslaught, faintly shaking and wiping away dribble as I mumbled ‘But what did it mean? Why was she shaving a bear? How did the cheese learn to dance?’

But in amongst the cross dressing and the pratfalls and the endlessly endlessly frolicking women, there are ads where weirdness is used to great effect, to create an image that sticks in your head for days, as in this recent spot for Tsuruya tiles, or this classic ad for sushi restaurant Ginsara. This is especially important in a crowded market like Japan, where even walking down the street can sometimes feel like being run over by a very loud very colourful bus intent on selling you things.

And no one does this sort of weird and wonderful advertising better than SoftBank. Neither a bank nor soft (as far as I know), they are a mobile phone provider, and since 2007 they have been fronted by an adorable white dog who also happens to be father to an otherwise human family.

This ‘gag’ is the nucleus of weird around which the rest of the ads’ oddness circles… The son is a black American man; Tommy Lee Jones is their maid and an alien (I think?); the dog father is voiced by highly-respected actor Kinya Kitaōji; everyone behaves with a deliberate woodenness, most effective when they’re doing things that make absolutely no sense, like going into space or hunting down a robot postman.

The ads have little to do with the product, and are held together conceptually with tape, string and weak puns. And yet SoftBank was named Japan’s ‘Brand of the Year’ every year since the series launched until 2014. Which raises a lot more questions than it answers. Do ideas matter? Is it OK to be unabashedly bizarre in advertising? Is the key to selling mobile phone contracts just to make a dog go bowling?

I don’t know. I don’t think I know much of anything anymore… except that I love this dog, and I really want to buy a mobile phone…

Here’s a compilation of the some of the best in the series: