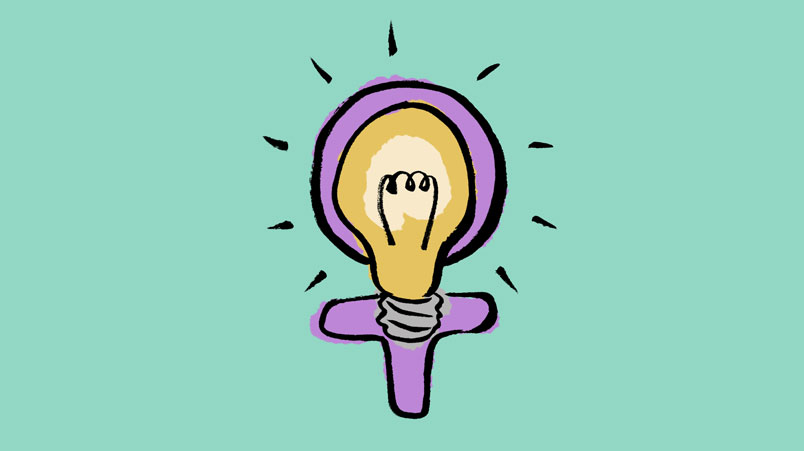 Coming soon to a vagina near you: femtech – the emerging sector shaking up how women tend to their health. And how they talk about it.

You see, in the old days, women didn’t have health needs. Or so centuries of no one thinking or talking about them would suggest. Back then, advertising looked like this:

Are they selling… boats?

No wonder, then, that, as Caitlynne Hollis at Perifit puts it, women are ‘just fed up’.
Cue a raft of start-ups bursting onto the scene, offering everything from period pants, to pelvic trainers, to vaginal biome mapping. And it’s not just the products that are innovative. While traditional women’s health companies talk about ‘intimate areas’, and ‘life’s tricky moments’, femtech brands are using a much more honest and assertive tone to talk about women’s health. And we are here for it.

So join us (won’t you) as we dive into the language of this brave new world – what a femtech tone of voice looks like, the language challenges femtech brands face, and the waves all that’s making in the wider world.

One challenge for brands in the sector has been coming up with language to describe what they do. In fact, the name ‘femtech’, coined by Ida Tin, founder of Clue, has only been around since 2016.

‘The gender health gap’ is another handy new term – a neat catch-all for a disparity in men’s and women’s health outcomes that, as Juno Bio founder Leighton Turner explains, is ‘embedded through the entire chain of healthcare’.

Even things that have names can be tricky to talk about

For topics that have traditionally been taboo – like vaginas, periods, or incontinence – the available vocab tends to sound either clinical, coy, or jarringly up-front. Think ‘menses’ vs. ‘leaks’ vs. ‘period blood’. 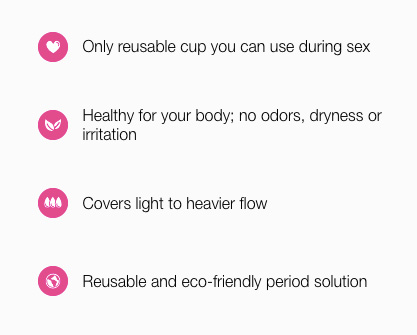 Most femtech brands try to try to smash the stigma and call a spade a spade. But advertising platforms hate spades.

And by ‘spades’ we mean ‘vaginas’. 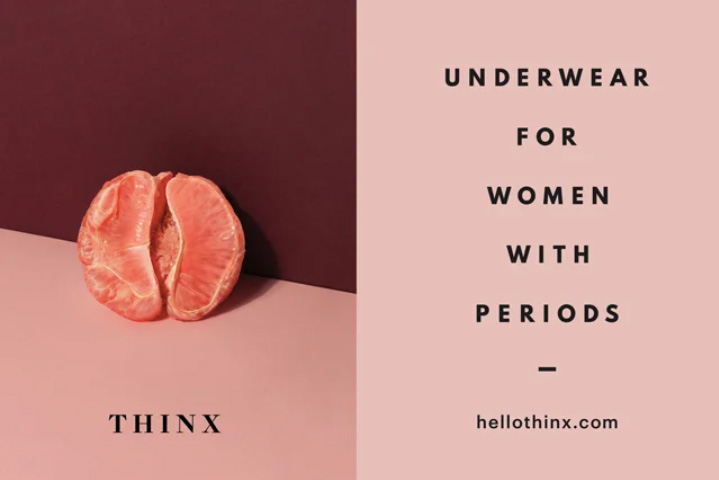 This Thinx ad asserts the controversial view that menstruation exists, hence its ban from the New York subway.

In a small study run by Intimacy Justice, 100% of femtech brands had one of their ads pulled by Facebook, and half had their ad accounts suspended altogether, for crimes as serious as mentioning endometriosis, discussing the menopause, and acknowledging the existence of a pelvic floor.

Are you talking to ‘women’, ‘womxn’, or ‘people who menstruate’? When you deal in gendered languages, like Spanish or French, this question becomes even more fraught. 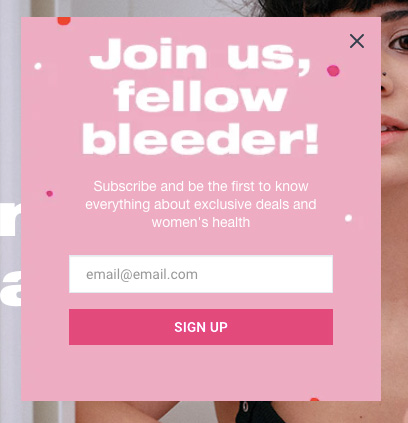 Period product maker Intimina opts for ‘bleeder’, which we like because it sounds voluntary and, maybe, projectile.

It’s not easy to include everyone while also keeping messaging clear, and what feels inclusive to one person might not to someone else. It’s why brands need to stay in tune and make calls case-by-case.

Even if you’re already valiantly vaulting those messaging hurdles, there’s still the small matter of coming up with a tone of voice for your brand. For femtech start-ups, it all comes down to one thing: trust.

That’s partly par for the course when you’re dealing with health; you’re not going to let just anyone come poking around your bod with their swabs and their suppositories. And it’s partly because so many women have been burnt before – branding has to work doubly hard to win them round.

One way to do that is to make yourself sound approachable. Which means getting as far from a ‘we know best’ attitude as possible. It’s why a lot of femtech companies position themselves as partners, and their audience as peers. 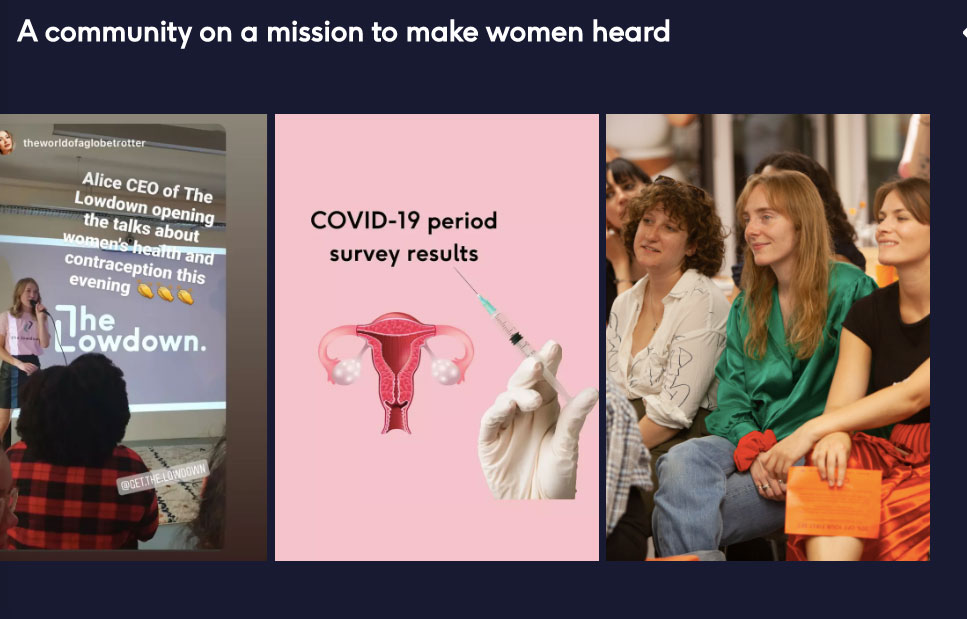 Contraception comparison platform The Lowdown calls itself a ‘community’ instead of a ‘company’ or ‘brand’.

Which involves, as Caitlynne at Perifit puts it, ‘bringing something more than just a product, but also resources’ – whether that’s articles, podcasts, or events. The idea is to get past the old brand-customer dynamic – to give your audience useful content, and win their trust in return.

And the tone follows suit. Brands opt for the sort of casual language you’d use with a friend… 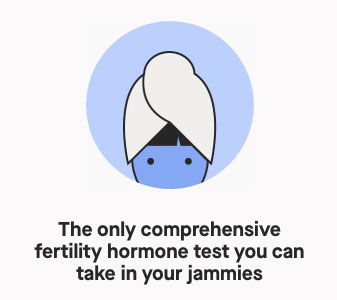 … and discuss health with words that are more caring than clinical.

A feisty few femtech brands choose to be challenging 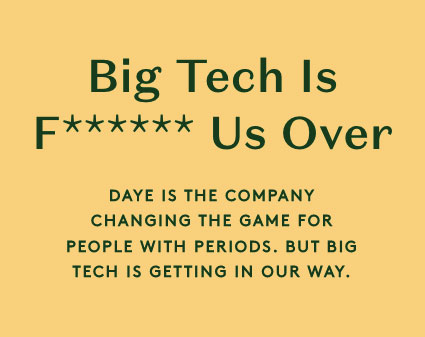 … and sometimes it means taking on taboos…

Handled with care, a challenger tone lets a brand blast clean through stigma, and stand out from a sea of sameness among sound-a-like approachable competitors. 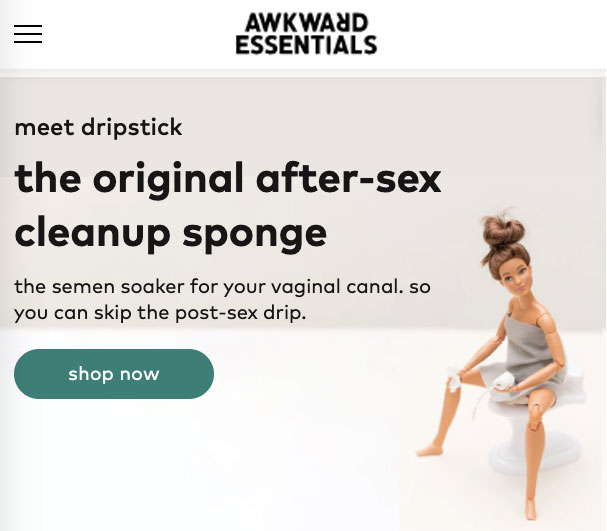 But it’s not without risks. Fumble the execution, and copy can come across as patronising or glib.

What I deserve is a pay rise, babe.

Almost everyone tries to be clear…

… which makes sense. Transparency shows you’ve got nothing to hide.

Plus, femtech is new. That matters for a couple of reasons. First, you might be telling an audience about a thing they’ve never heard of before, so it can pay to keep copy clean, à la Perifit:

Second, unlike other categories, most of the time, a femtech brand isn’t inventing a problem so it can swoop in and solve it. Usually, the issues femtech companies tackle are real and pretty pressing. Which means comms are less about crafting an emotion or an attitude, and more about, as Leighton at Juno Bio puts it, ‘communicating value in very clear terms, and matching it with a product that delivers very clear value.’ 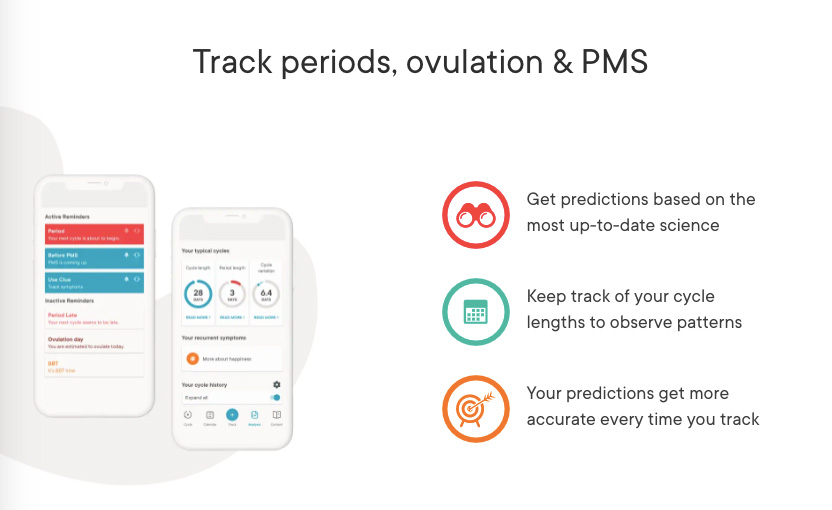 As competition builds, femtech marketing will need to work harder to stand out. Which means brands are likely to start staking their stance on more than the fact that their products work. Add to that bigger budgets, and we could see more creative messaging in more mainstream media (a.k.a. cool telly ads, like this spot we worked on with Bodyform, one of the few women’s health OGs swerving away from a traditional tone).

If the sight of violently blue liquid being poured into a sanitary towel quietly taught a generation of women not to talk about their bodies, the starry-eyed optimist in us hopes femtech could help reverse that trend. Maybe hearing about things like periods, pregnancy and prolapse more regularly could start to sand down some of those old stigmas, and give us new, clearer, better ways to talk about women’s health.

You’re at a cocktail party. A fellow guest sidles up. ‘What the hell is femtech?’ they bark. But you are unfazed. Downing your martini in a single gulp including olive and cocktail stick, you reply that it broadly breaks down into a few areas:

Stuff to help with periods, like the Ziggy cup or Thinx period pants

Stuff to stop you getting pregnant, like contraception comparison platform The Lowdown, or OUI, a suppository that turns your vaginal mucus into a natural sperm stopper (yes really)

Stuff for when you are pregnant, like Bloomlife’s pregnancy wearable, or virtual abortion clinic Hey Jane

Stuff to help look after your vagina or pelvis, like Juno Bio’s vaginal microbiome mapping, or Perifit’s pelvis-operated games