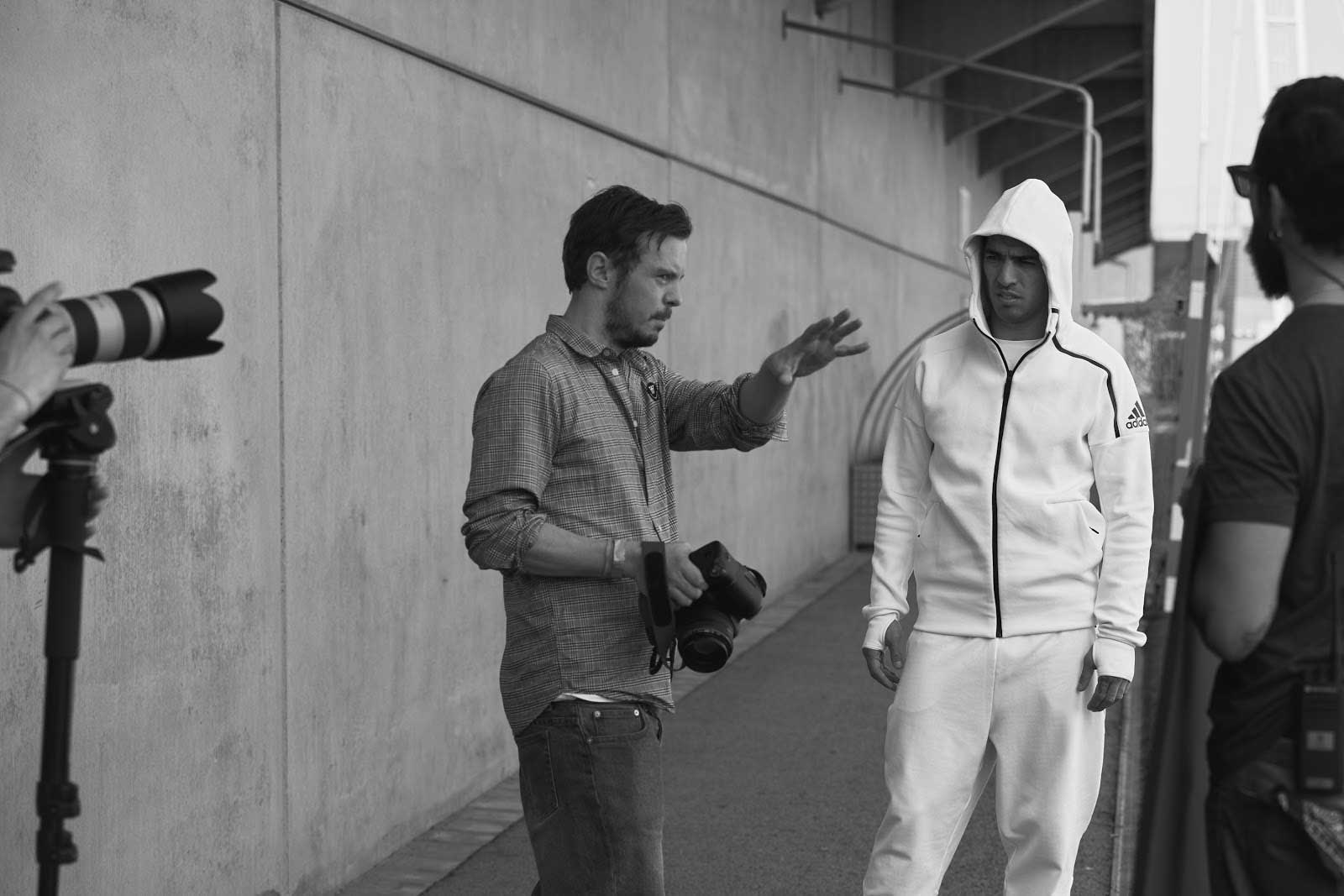 The photographer capturing people and places near and far

He’s photographed Anthony Joshua and Lionel Messi. He regularly flies across the globe to shoot for the likes of Nike and Adidas. He’s even been to Mars (sort of). Yet Olly Burn is a photographer with his feet firmly on the ground. As comfortable capturing skateboarders on the streets of south London as he is shooting sports stars for top brands, Olly is known for his cool, elegant pictures, brimming with humanity. We caught up with him to talk about his work, and find out what’s keeping him inspired through lockdown.

How would you describe your work?

My work is about the interaction between people and places. I’m a photographer working largely in the commercial sector; so, advertising. I’d probably classify myself as a sport photographer, but that’s come out of an evolution; it was never really planned. How did you get into photography?

As a kid I was always into art and design. I’m doodling now (Olly shows me his notepad. I can confirm: he is doodling now). At school we had a tiny darkroom, and I really enjoyed it. It was during my Art Foundation that I decided photography was for me.

After I finished my degree in Photography at Falmouth, I worked as a photographer on a cruise ship. It was like a year-long party, and I cut my teeth doing it. We earned 100% on commission, which meant some weeks you’d work seven days a week and come out with 65 quid. So we had to work hard, and quickly. And I got to do things I’d never done at college like approaching strangers and building up a rapport with them.

After I moved to London, I got a job at a model-making company before going on to do about three and a half years of assisting. I got to observe what commercial photographers did, and what about their work I admired, as well as things that I would do differently. I also did a lot of retouching, which gave me the chance to experiment and learn how I like things to look, and how to achieve those looks. While I was still assisting, I got lucky and was approached by a great agent, who I’m still with nearly eight years later.

What drew you to sports photography?

I love photographing people, but when you photograph people commercially, you can fall into lifestyle photography. Because that’s usually not someone doing anything specific, you end up with clichés – you know, someone sitting in a café. With sports – whether it’s trapeze, or skateboarding, or football – you get to meet amazing people who are amazing at doing things. And then you get to work with them to make pictures of them doing their thing. 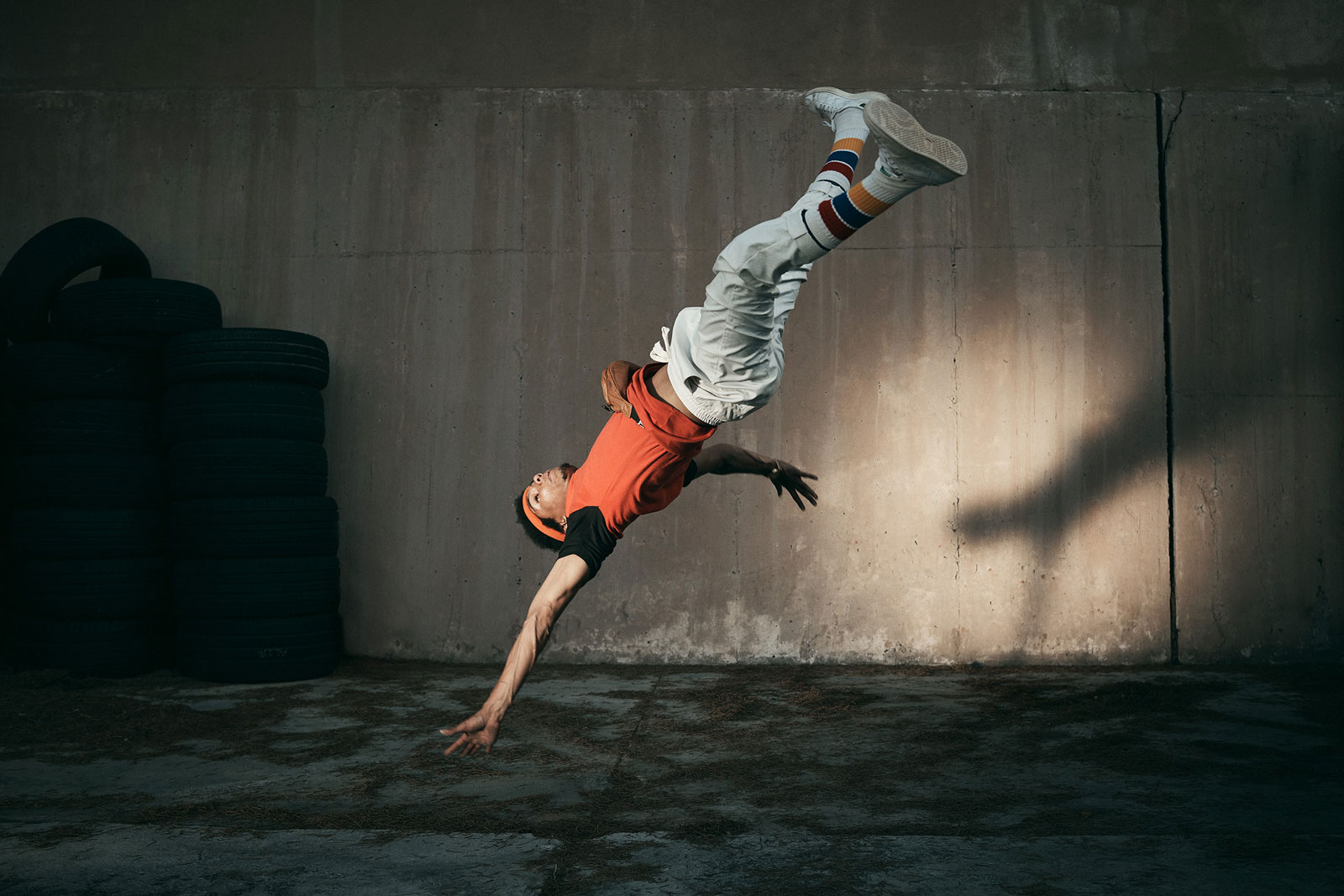 And they push you. I photographed some breakdancers in Cape Town a couple of years ago, and there was this one move that a dancer called Carl really wanted to pull off. I’d get what I thought was a great shot, but he’d look at it and say ‘We’re doing it again.’ We kept at it for nearly an hour, just so that his hands and his legs and his fingers and his head were all in exactly the right position. I couldn’t do that on my own. That’s the collaborative nature of sports photography – the excitement of working with somebody to achieve a similar goal.

Do you do a lot of research before shooting an unfamiliar sport?

I probably shouldn’t admit this, but I don’t research particularly heavily. Some sports or dance photographers like to storyboard everything, or at least know what moves they want to capture. I tend to go into shoots open. I like the spontaneity and the authenticity of it. It’s about me and that person and that environment in that moment. And whatever happens happens.

As soon as I pick up the camera, and I’m with the model, that’s the beginning of the journey. We’re getting to know each other. Then it’s a process. You get to the end and it’s evolved and you’ve learnt a bit more about each other. 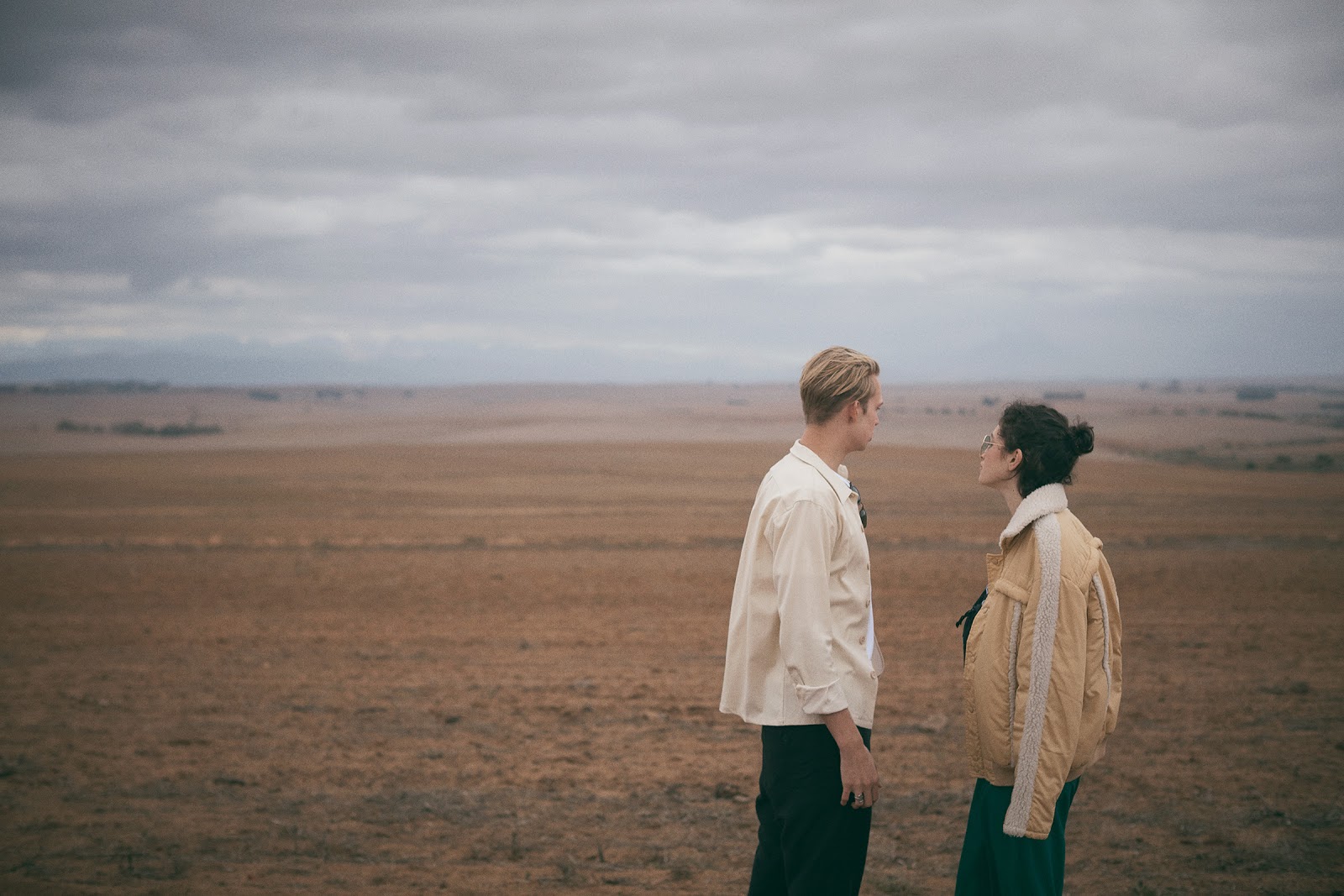 And, as much as you can plan everything, there might be some corner of the location behind a truck that just happens to be catching the light really well. I can think of about five pictures now in my portfolio where a model’s wearing the stylist’s jacket that just got chucked on them because it was too cold. I like shots like that, shots that are outside anything that could have been planned.

Are you able to bring that same spontaneity to commercial work?

Commissioned work is a bit different. But once you have everything sorted – the locations, the talent and so on – once those things are approved and everyone’s happy, then you can start exploring, and get that same spontaneity.

I think the most challenging thing with commercial work is maintaining control afterwards. Often at the end of the shoot day, agencies will take the hard drive away, and that’s job done. But because I think the select, colour grading and post-production are so important, I try to keep as involved as possible. I’ll always send a follow-up the next day with an edit of my favourite shots. The same with retouching: I’ll retouch two or three shots as examples and hope the in-house retouchers take note.

You’ve shot in lots of far-flung locations. Do you have any favourites?

Travelling for shoots is the best part of the job, definitely. As for favourites… I did a personal project at the Mars Research Facility in Utah. It’s a mock base where people go to experience what life would be like on Mars. You have rations of dried food. You can go outside twice a day for a maximum of an hour. When you do go out, you have to put on a spacesuit and go through a fake airlock. It was bizarre, but the landscape in the middle of Utah is just incredible – you really could be on Mars. 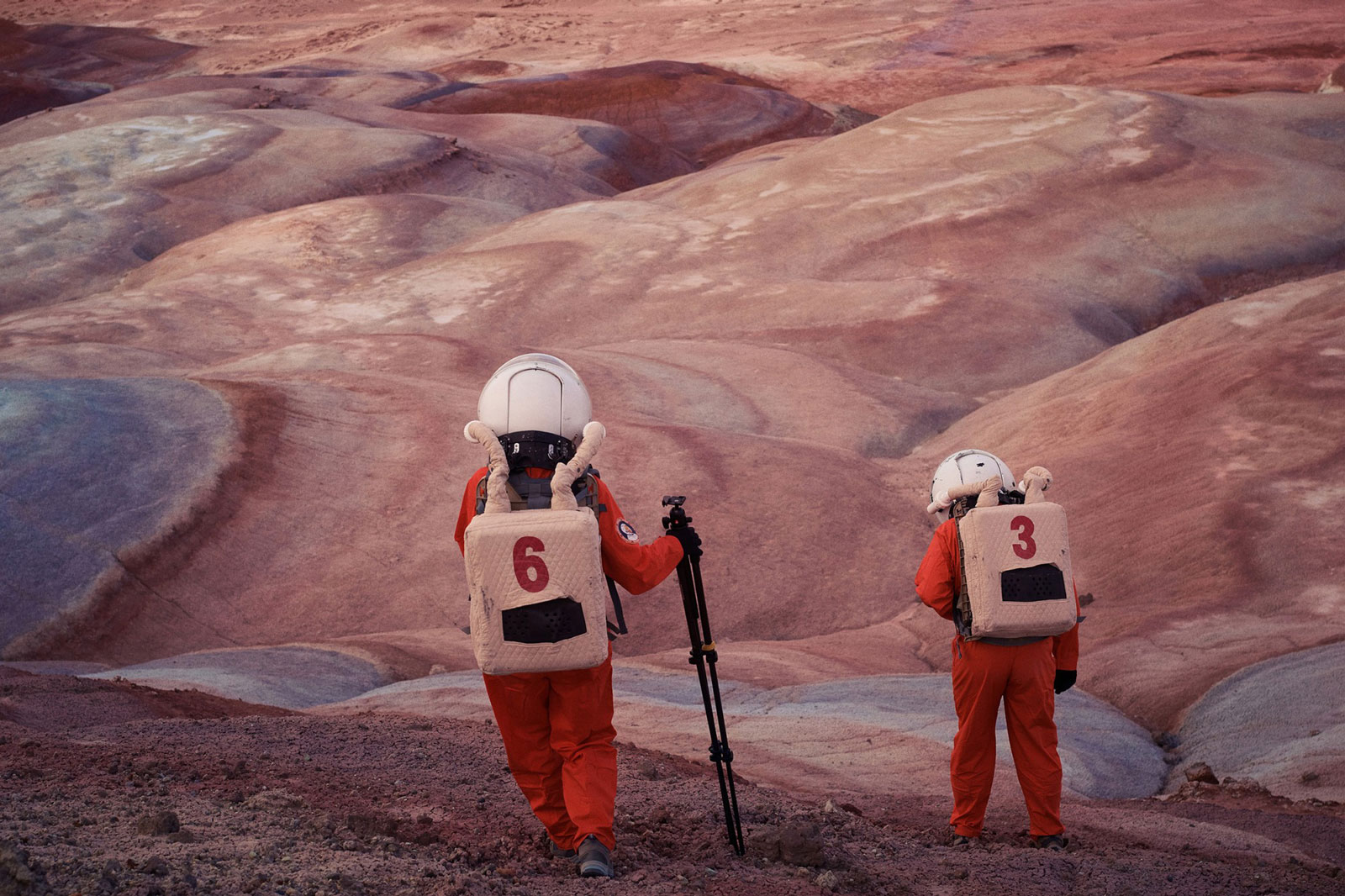 When it’s for a commissioned shoot, I’m happy to go anywhere. It’s not like landing as a tourist and having to rely on a guidebook or word of mouth. You have a local producer or a fixer – somebody that knows the area – who takes you to amazing places that you probably wouldn’t think to visit. You get to hang around with local people and get inside a place quite quickly. It’s really fun. Working internationally has all but stopped due to Covid, and I miss it. I dream about it.

With the rapport between you and the model being so important to your work, do you ever encounter any issues with language when you shoot overseas?

There’s actually something fun about working with talent when there’s a language barrier. We did a shoot with Dove in Shanghai, and it was all street cast, so not professional models. It was fathers with their young children, and it was just lovely. They were really excited because they’d been plucked out from somewhere and were suddenly on this set doing all this stuff. I’d be miming with them, signing weird things to act out. It’s amazing that you can communicate with people when there’s not that direct route. It’s exciting, and it adds to the challenge of it. 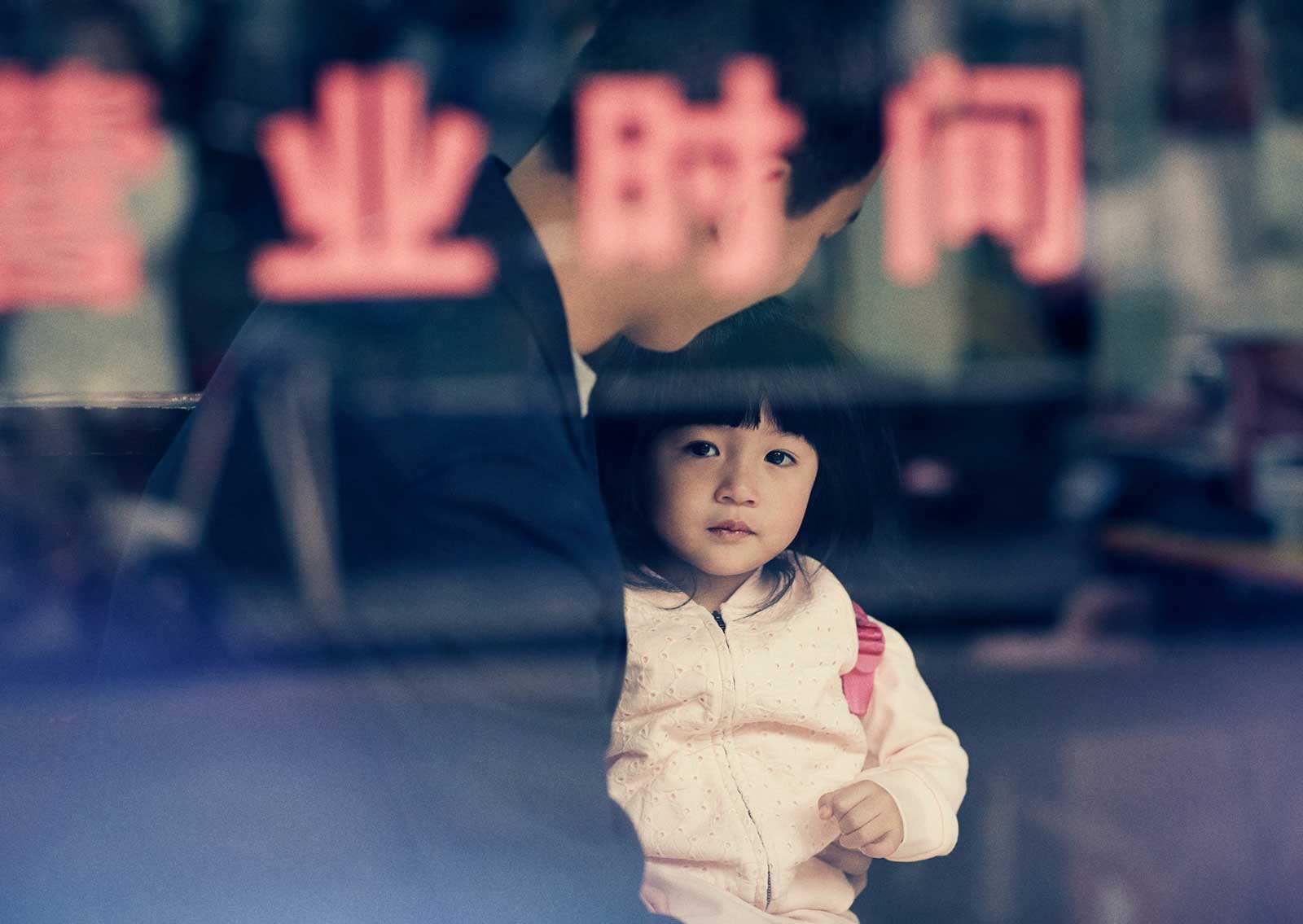 Are there times when the rapport with a subject doesn’t flow quite as easily?

It can be hard when a model comes to a shoot with an idea of how they want to be and what they want to do. We’re always trying to break down that notion of ‘being a model’ and bring them back to just being a person, to make them comfortable with being themselves. Which leads me back to athletes: they don’t have that. There’s no reason for them to be self-conscious because they’re doing what they’re good at. There isn’t that barrier to break down. 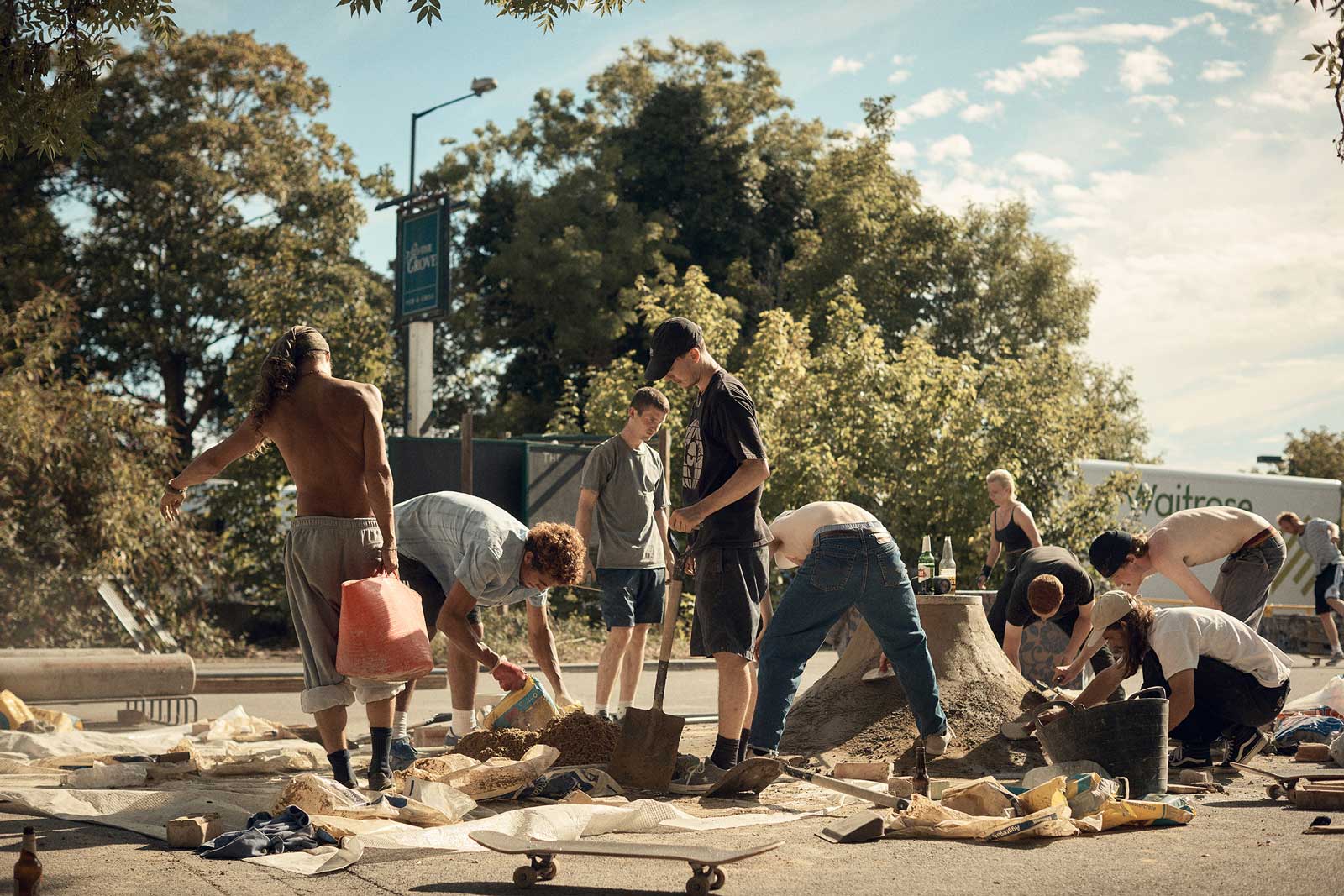 How have you found shooting during the pandemic?

It’s hard to do commercial work right now. And personal work is a balancing act. Within the current rules [of London lockdown] you can do it to a certain extent, but if I were to go out and get a couple of athletes and a stylist who would have to get the tube to meet me, it would feel a bit against the spirit of lockdown. So, I’ve been exploring what’s around my local area. There are some amazing little pockets of activity. I’ve shot basketball players, a trapeze artist, open-air swimmers…

The most involved was the skate series I did last summer. It was a real process. I was driving one day and saw this makeshift skatepark. I went a few times early in the morning, when I knew it would either be empty or there’d be just a couple of people around. Then I went back in the evening with fish and chips, just to chat to people. The next day I went with my camera, and by the fifth or sixth time going there, I knew enough faces to be comfortable taking pictures.

It sounds like you spent a lot of time getting to know the people you were photographing. Is that important to you when you take pictures?

I can’t bring myself to put a camera in someone’s face unless there’s a good reason or there’s been a discussion. And I think it’s a much more productive way of understanding people’s stories.

It’s the same on commercial shoots. One thing I love about going away for shoots is that you’ll often meet everyone and have dinner together in the hotel the night before. Everyone gets to know each other, and when you turn up on set the first morning, it’s suddenly much more productive – everyone’s already in the swing of it. If the pandemic and all restrictions ended tomorrow, what would you like to do next?

Go to the pub.

This time last year I was planning a trip to America. I wanted to go from St. Louis to New Orleans driving down the Mississippi and taking pictures along the way. It’s almost bang on a thousand miles, and I was curious to see how much things would change over that distance. I wondered what stories you’d find as you went from big cities to weird small towns. My agent was well up for it. They suggested I identify some people to meet or things to see along the way. And I know that’s the sensible thing to do, but I also know deep down that I wouldn’t do that. I’d just get there and see what happened. Maybe I wouldn’t get as much out of the trip or maybe it would make me more open to different things. That would be the dream.

The photography of Malick Sidibe